Change of flightpath for UAE airline

And here we go again... another sensationalistic masterpiece on us. Check-out the aircraft picture and the so-called quote by me out of context (by the way, the second time this quality newspaper has used exactly this out of context quote). Do journalists actually care what they write about? Here is the link: http://www.7daysindubai.com/Change-flightpath-UAE-airline/story-16442768-detail/story.html


A UAE airline that previously announced plans to operate the country’s first ever domestic air routes has said it’s inaugural flight will take-off next week - headed for war-torn Somalia. Attempts by Fujairah-based carrier Eastern Express to provide flights between the emirate and Abu Dhabi, have been stymied by delays.


Fleet delivery problems clipped the company’s wings when it tried to jet into UAE skies in the first quarter of this year.

A UAE airline that previously announced plans to operate the country’s first ever domestic air routes has said it’s inaugural flight will take-off next week - headed for war-torn Somalia.


Flying to highly troubled Somalia however - which has topped international think-tank the Fund for Peace’s ‘failed state’ index for the past five years - seems to present no such problems for the fledgling carrier. “There has always been a need for internal and regional flights in Somalia,” the airline’s business development manager Mike Carvath told 7DAYS.


“Somalia is a huge place but a lot of the country’s roads are unsafe and unsuitable.” Eastern Express will initially fly to Garowe in the north east of Somalia and the country’s main port of Basoso which serves the Gulf of Aden - the scene of numerous heists by ruthless Somali pirates.


However, Carvath is confident there will be no shortage of flyers from the UAE, particularly among the substantial number of Somalis living in Dubai. “We expect to get business from businessmen and their families,” he says. Eastern Express plans to serve Somalia twice a week - and is targeting 30 to 35 passengers per flight. However the firm will do so from Sharjah International Airport, rather than Fujairah.


The airline alsos plan to fly to Djibouti, Addis Ababa in Ethiopia, Nairobi in Kenya and - in time - the Somali capital of Mogadishu. Eastern Express admitted Fujairah-based domestic services to other emirates in the UAE were “still delayed” - but declined to say for how much longer.


In March this year, CEO Alex De Vos admitted to delegates at an aviation conference in Dubai that the delay of the carrier’s launch had “financial implications” for the Fujairah flyer, adding: “A lot of other businesses would have shut its doors and said ‘it’s just not worth it’ - yes, but we’re stupid.”

Posted by Alex de Vos at 2:15 PM No comments: Links to this post

Email ThisBlogThis!Share to TwitterShare to FacebookShare to Pinterest
Appreciation time!

And I must say that I was suitably impressed by the presentations on the respective subjects. Well done, ladies! 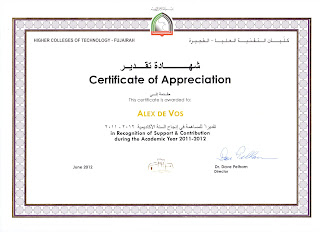 Posted by Alex de Vos at 2:01 PM No comments: Links to this post